Higgs Boson does not exist

I can’t believe we are spending millions of dollars to make a super collider to try and find a made up particle to plug a hole in a theory that is wrong.
Maybe instead of trying to pin our hopes of understanding the beginnings of the universe and how particles get mass we should make a new theory.

All particles have mass. Even photons. Its just too small to measure by us. Larger particles gain their mass when small ones coalesce and collide. Black hole anyone?

All this effort is only focusing on one part of the equation. E. They think if they have enough energy it will generate the mass they are looking for. The beginning of the universe was also under immense, unmeasurable pressure as well as heat. Leaving these out of the experiment render its results useless. 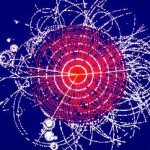